ATH10K is the mac80211 wireless driver for Qualcomm Atheros QCA988x family of chips, and I'm currently working [1] with the QCA6584 chip which is an automotive graded radio chip with PHY support for the abgn+ac modes. The connection interface to the chip is SDIO which is hardly supported for now, but my friend and kernelhacker, Erik Strömdahl [2] , has got his hands dirty and is currently working on it. There has been some progress, the chip now able to scan, connect, send and receive data. There is still some issues with the link speed but that is coming.

He is also the reason for why I got interested in the network part of the kernel which is quite... big.

Even only the wireless networking subsystem is quite big, and the first you meet when you start to dig is a bunch of terms thrown up in your face. I will try to briefly describe a few of these terms that is fundamental for wireless communication.

In this post will discuss the right side of the this figure: 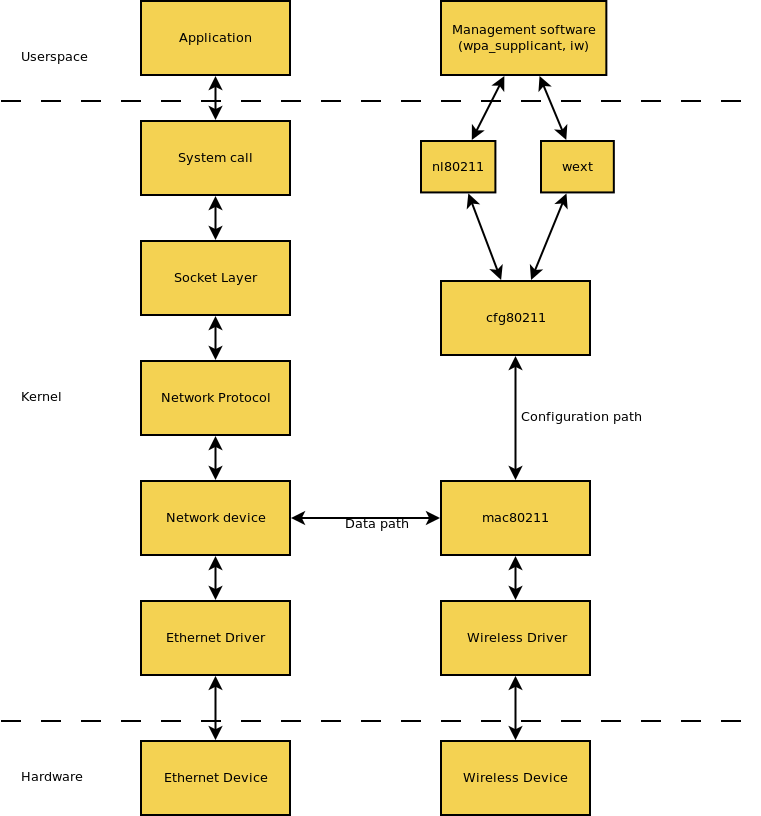 We will see 802.11 a lot of times, so the first thing is to know where these numbers comes from. IEEE 802.11 is a set of specifications for implementation of wireless networking over several frequency bands. The specifications cover layer 1 (Physical) and layer 2 (Data link) of the OSI model [3].

One more thing that we need to cover is the management layer, since all other layers somehow depend on it.

The Management layer assist you in several ways. For instance, it handle things such as scanning, authentication, beacons, associations and much more.

Scanning is simply looking for other 802.11 compliant devices in the air. There are two types of scanning; passive and active.

When performing a passive scanning, the radio is listening passively for beacons, without transmitting packages, as it moves from channel to channel and records all devices that it receives beacons from. Higher frequency bands in the ieee802.11a standard does not allow to transmit anything unless you have heard an Access Point (AP) beacon. Passive scanning is therefore the only way to be aware of the surroundings.

Active scanning on the other hand, is transmitting Probe Request (IEEE80211_STYPE_PROBE_REQ) management packets. This type of scanning is also walking from channel to channel, sending these probe requests management packet for each channel.

In this type of authentication the client and AP is using a shared key, also known as Wired Equivalent Privacy (WEP) key.

The association is started when the station sends management frames of the type IEEE80211_STYPE_ASSOC_REQ. In the kernel code this is handled by ieee80211_send_assoc() in .../net/mac80211/mlme.c

When the station is roaming, i.e. moving between APs within an ESS (Extended Service Set), it also sends a reassociation request to a new AP of the type IEEE802_STYPE_REASSOC_REQ. Association and reassociation has so much in common that it is both handled by ieee80211_send_assoc().

The MAC layer can be further broken down into two pieces: Upper MAC and Lower MAC. The upper part of the MAC handle the management aspect (all that we covered in the MLME section above), and the lower part handle the time critical operations such as ACK:ing received packets.

The Linux wireless subsystem consists of two major parts, where this, mac80211, is one of them. cfg80211 is the other major part.

cfg80211 is a configuration management service for mac80211 compliant devices. Both Full MAC and Soft MAC devices needs to implement operations to be compatible with the cfg80211 configuration interface in order to let userspace application to configure the device.

The configuration may be done with on of two interfaces, wext and nl80211.

This is the legacy and ugly way to configure wireless devices. It is still supported only for backward compatibility reasons. Users of this configuration interface are wireless-tools (iwconfig, iwlist).

nl80211 on the other hand, is a new netlink interface intended to replace the Wireless Extension (wext) interface. Users of this interface is typically iw and wpa_supplicant.

The whole network stack of the Linux kernel is really complex and optimized for high throughput with low latencies. In this post we only covered what support for wireless devices has complemented the stack with, which is mainly the mac80211 layer for handle all device management, and cfg80211 layer to configure the MAC layer. Packets to wireless devices is divided into data packets and configuration/managment packets. The data packets follow the same path as for all network devices, and the management packets goes to the cfg80211 layer.