Git notes [1] is a neat function that has been around since v1.6.6. Notes is a kind of metadata that belongs to a certain commit but is stored separately (different git object) from the commit itself. The fact that it is a separate git object is important, it will therefor keep the commit hash intact, and as a bonus - it has its own diff log.

git-notes has support for add, append, copy edit, list, prune, remove and show subcommands. These subcommands is rather self-explanatory, so I will not describe them any further.

add and edit fits allmost all my needs, so I will stick to them.

We now have two commits:

Add a note is simple:

Edit a note is as simple as adding one:

When to use notes?

The first field of application is obvious, keep notes about individual commits. The kind of notes I usually use is comments during log reviews.

For the last year I have been using notes for a more practical use; patch changelog history, which is an incredible powerful but undocumented (try to google it yourself) area of use for notes.

When talking about patches, the --- marker line serves the essential purpose of marking for patch handling tools where the commit message ends. One good use for the additional comments after the --- marker is for patch changelogs, which describe what has changed between the v1 and v2 version of the patch.

When working with patches, it is not unusual that it will take a few iterations until the patchset is in a ready-to-merge state. The way to rework patches is with an interactive rebase and amending.

A note is linked to a certain git object and this will be a problem with rebase and amend since it will overwrite that git object. With that said; if you amend your commit, the notes will disappear... unless... you configure git to rewrite the note upon amend and rebase.

When rewriting commits with <command> (currently amend or rebase) and this variable is set to true, Git automatically copies your notes from the original to the rewritten commit. Defaults to true, but see notes.rewriteRef below.

When copying notes during a rewrite, specifies the (fully qualified) ref whose notes should be copied. The ref may be a glob, in which case notes in all matching refs will be copied. You may also specify this configuration several times.

Does not have a default value; you must configure this variable to enable note rewriting. Set it to refs/notes/commits to enable rewriting for the default commit notes.

This setting can be overridden with the GIT_NOTES_REWRITE_REF environment variable, which must be a colon separated list of refs or globs.

The manpage simply tells you to add these lines to your ~/.gitconfig or .git/config

To make amend and rebase rewrite the notes.

The best part is that git format-patch --notes will generate patches with appended notes after the --- marker.

This makes the patch workflow real smooth instead of manually track and update your patch changelogs. 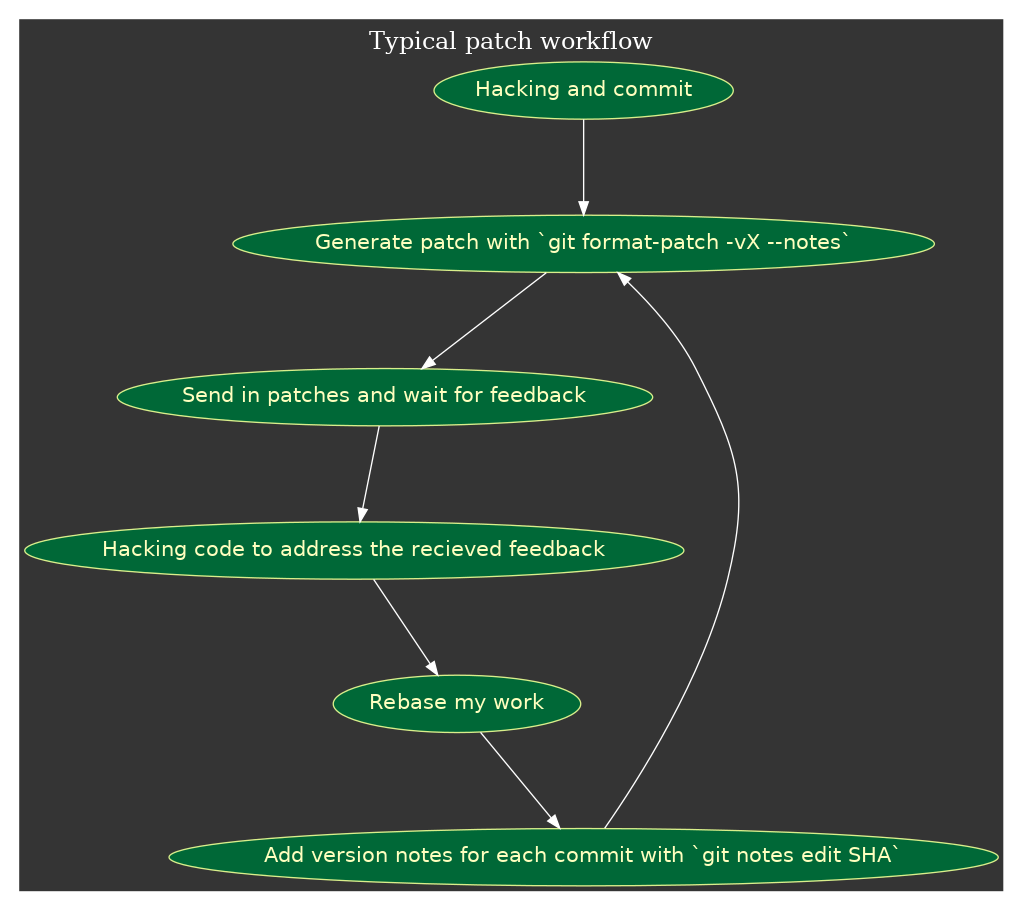 Even notes has a log (all objects in refs/XXX has), and it could be useful to see how your notes has evolved over time:

The notes itself is stored as git object in .git/refs/notes. A thing to keep in mind is that refs/notes is not pushed by default, but that is not a problem - my opinion is that notes should be local only anyway.

If you really want to push your notes, you can to that with

and fetch them with